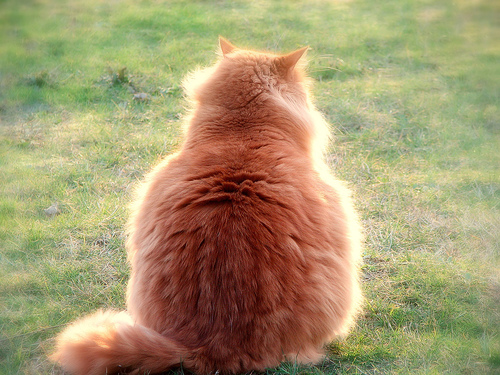 if a researcher were to biopsy the fat deposits of your thigh, abdomen, or (pretty much anywhere else that adipose tissue likes to gather), they would be able to tell you exactly what kinds of fats you have been eating.

From their sample, they would be able to report back to you the dietary origins of your body fat:  from chicken, fish, beef, dairy fat, vegetable oil – even grease from the take-out diner.

In one of the first studies to show that body fat comes from food fats, rather than other parts of the diet, researchers at a Veteran’s Administration home in Los Angeles asked residents to consume either mornal diets or diets using vegetable oils instead of animal fats.

Then, every four months, each man dutifully had a fat sample removed from his derriere with a tiny needle.  Laboratory analysis shows that body fat mirrored the kinds of fats in the foods eaten.  Men eating lots of been and chicken fat ended up with these remnants in their OWN body fat, while vegetable fat eaters ended up with vegetable fats stored in their behinds..  Some of  the men stayed with the experimental diet for as long as five years, and the same pattern held true:  the fat they ate is what built fat in their bodies. (1,2)  ~ Neal Barnard, M.D. Turn off the Fat Genes

Additional research evidence tells us that though it is possible for bodyfat stores to be multiplied via any excessive dietary calorie intake, it is far easier for the body to store dietary fat as bodyfat than dietary carbohydrate.  Dietary fat slips quite easily via the action of LPL (lipoprotein lipase, the key enzyme for storing fat in your cells) into fat cells for storage, whereas carbohydrate is more easily disippated as body heat and more reluctant to generate addition fat stores.

LPL is looking for fat.  It pulls it out of the fat molecules in what you eat to pass it as quickly and efficiently as possible into body fat for storage.  In contrast, the process for carbohydrate to be stored as body fat is far less efficient, meaning the body takes a chunk of the energy available in dietary carbohydrate to convert it to fat storage.

According the Dr. John McDougall’s extensively researched works, including The McDougall Plan and The McDougall Program for Maximum Weight Loss “it’s easy to make a pound of fat”.  An average of 93 percent of fat consumed goes to storage in fat tissue.  “All this transport into fat cells is accomplished so efficiently that the original chemical structure of the fat is maintained.”

Converting food fat into body fat is easy;  the process doesn’t even modify the molecules.  Research scientists can actually take the fat biopsies off your hips or waist and tell you where it came from – pig fat, dair fat, chicken fat, or olive oil;  the fat is still the same as it was on your plate, but now it is under your skin.  The saying ‘from your lips to your hips’ is literally true.  Fat is also an appetite stimulant – the more you eat, the more you want.  ~ Dr. Joel Fuhrman, M.D.  Eat to Live

Sobering and liberating information at the same time.

Fat food for thought.  Yes, calories count.  Yet evidence suggests that when those calories come from dietary fat, there is more to it.