If you have been hovering anywhere near the plant-based diet and plant-based nutrition world, then the name Esselstyn is no news to you. And if you’re looking for one perfect primer to switching up to a whole foods plant-strong diet, then Rip Esselstyn’s Engine 2 Diet is one solid resource that is a must have on your plant-strong bookshelf. 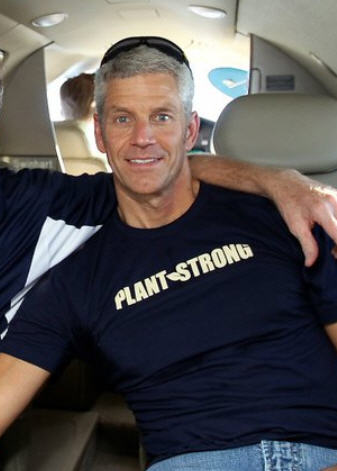 This week Vegan Mainstream caught up with Rip, who you might also recognize from the film and book Forks Over Knives,  in interview.  A triathlete-turned fireman, Rip is an inspiration to men and women everywhere with proof that not only do real men eat plants, but they are sexier than those SADs (standard American diet eaters) and the omnivores who pride themselves in pounding down the steak.  Because Rip exemplifies 3 other qualities that are on the top of my ‘hunk’ list:  they care about their health, the environment, and exemplify compassion as well.

Here is a portion of VM’s interview with Rip.  Follow the links to read the interview in its entirety.

VM: So, what do you tell athletes who think they won’t have enough energy eating only plants?

RE: I tell them they are grossly misinformed. If they want to start eating first-class foods (as opposed to second or third, i.e. meat, dairy and processed foods) and provide themselves with premium fuel to be the best athlete possible, they should transition to plants. Plant proteins are much friendlier: they don’t inflame your arteries, they’re not harsh on the kidneys and liver. As an athlete, you want to recover as fast as possible.

VM: What made you gravitate toward a plant-based lifestyle as a triathlete-turned-fireman?

Rip Esselstyn: I first started a plant-based diet because of my father’s research (Caldwell B. Esselstyn, Jr., M.D.) at the Cleveland Clinic in 1984. [He was working] to show that you can not only help, but reverse heart disease through a plant-based diet. I got exposed to my mom and dad starting to eat this way whenever I would come home from the University of Texas for vacations. In 1987, when I graduated and didn’t know what in the world I wanted to do with my life, I decided to be a professional triathlete instead of [working] a corporate 9-to-5 job, so it was for health reasons and for performance reasons. The actual genesis of the Engine 2 (E2) diet and the book was from Fire Station No. 2 in Austin, Texas. Me and a bunch of Texas firefighters started eating “plant-strong” – a word to describe what we do, which is a whole-food, plant-based and nutrient-rich diet, instead of a vegan diet which [can contain] a lot of extracted oils and refined products. We started eating that way in 2003 and saved the life of a firefighting brother. [We] haven’t looked back. To be Engine 2 is about saving lives through “plant-strong” nutrition and education.

VM: Why do you differentiate between vegan and plant-based?

RE: If I were going to use that term in a firehouse, the other firefighters would hang me by my firefighting boots! A lot of it is about salesmanship. “Plant strong” is something they can get their head around. Vegan or vegetarian? They can’t, since they all think they’re macho men. They now know real men eat plants, but before that, they thought real men ate meat. The terms vegan and vegetarian are such pregnant words; sometimes they have baggage. Veganism is an ideology where some are ethical, some are dietary [vegans]. With “plant-strong,” the foundation of it is for health reasons. I’ve since expanded [“plant-strong”] to mean you’re not only saving your own life, you’re also saving the lives of animals and the planet. So it’s much more far-reaching [now]. Even if you are only doing [E2] for the selfish reasons, it still affects everything else.

I know vegans who eat French Fries, drink Coke, eat Jelly Beans and soak everything in olive or canola oil. For example, Gene Baur of Farm Sanctuary got into it 100% for the animals. Over the last couple of years he’s been trying to become a more healthy vegan: eating whole-foods, not extracted oils, stuff like that. That’s the “plant-strong” way of eating.

VM: What do you think is the biggest catalyst for people to go vegan or switch to a plant-based diet?

RE: I think the biggest [catalyst] is people deciding to make the commitment to their health. Once you decide to do it, it’s a slam dunk. Everybody’s got belly buttons and everybody has an excuse – either “I don’t have time” or “Where do I get my protein?” The bottom line is once you have the information and decide to really respect and love yourself and take your health to the next level, it’s a cinch, no harder than riding a bike. Now, it’s so much easier because we have so many more recipes, and the grocery stores have so many more products. Once you have [plant-based knowledge] it’s hard to put that [other] stuff in your body knowing what it’s doing to you.

Read the rest of Jessi Stafford’s interview with Rip here >>>>

Are you getting all the news that’s  healthy, fit, happy and hot each week? Click here to join 1,000′s of  others + get your weekly health, body shaping and food advice for free from the Plant-Strong Fitness Expert.