Victoria asks a great question today on facebook and I thought I’d share my reply to her here as well.

Hi Lani, Could you please comment on the recent NYT article in Tara Parker Pope’s column, “The Fat Trap”? Thanks!!  ~ Victoria S. 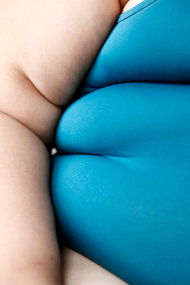 Certainly Victoria.  I’ve referred to some quotes from the article.  Here you go:

“…which consisted of special shakes called Optifast and two cups of low-starch vegetables, totaling just 500 to 550 calories a day for eight weeks. Ten weeks in, the dieters lost an average of 30 pounds.”

This type of weight loss plan has one aim – weight loss, with no regard to health, fat loss vs. lean tissue loss, & hormonal triggers from a starvation diet.

“Nutritionists counseled them in person and by phone, promoting regular exercise and urging them to eat more vegetables and less fat. But despite the effort, they slowly began to put on weight. “

What does “less fat” mean? It’s all relative. And if high fat foods and expelled oils continue to be a part of the diet – which they usually do unless expressly eliminated – then you have a situation where your natural satiety signals – hunger and fullness – do not get a chance to operate optimally.  If genetically weight challenged your hunger will override the ‘portion control’ of “less fat” to give you the satiety needs you are driven biologically to meet, which is a function of nutrition and bulk in your belly. See The 3 rules of satiety & why they are critical to your weight loss plan: Becoming naturally thin part 1Oils are 4,000 calories a lb and barely take up an nutritional or space room in the belly. Big problem.  See Is the fat you eat the fat you’ll wear?

“After a year, the patients already had regained an average of 11 of the pounds they struggled so hard to lose. They also reported feeling far more hungry and preoccupied with food than before they lost the weight.”

Unless a shift is made to high fiber – low fat, the problems for the weight challenged will persist. This is necessary for switching off your ‘fat genes’ which can be successfully done long term with diet and exercise changes. See Fat Genes:  Can you switch yours off?

“a gastric hormone called ghrelin, often dubbed the “hunger hormone,” was about 20 percent higher than at the start of the study. Another hormone associated with suppressing hunger, peptide YY, was also abnormally low. Levels of leptin, a hormone that suppresses hunger and increases metabolism, also remained lower than expected. A cocktail of other hormones associated with hunger and metabolism all remained significantly changed compared to pre-dieting levels. It was almost as if weight loss had put their bodies into a unique metabolic state, a sort of post-dieting syndrome that set them apart from people who hadn’t tried to lose weight in the first place.”

Leptin and ghrelin issues can be easily addressed by dietary choice and eating behaviors.

3 secrets to mastering leptin & ghrelin on a weight loss diet: Are your hormones hijacking your willpower?

“What we see here is a coordinated defense mechanism with multiple components all directed toward making us put on weight,” Proietto says. “This, I think, explains the high failure rate in obesity treatment.”

Short-term stopgaps (like Optifast) and dietary plans that don’t take into account genetic predisposition to a “weight problem” are – no wonder- doomed to fail. In addition, food plans that don’t take into account the deep draw of high fat, high sugar processed foods – and present strategies as to how to overcome and how important they are do address – are not going to success as a plan that addresses these issues does.  See Stress eating: No wonder we crave chocolate and not broccoli (video)

Motivation and Mindset for health, weight loss, and fitness- you know you need them to succeed with your goals.