Vegetarian Summerfest, making plant-based cheese, and The Plant-Based Journey book manuscript is due!

Book signing at the Summerfest bookstore. Can you believe who shared my time slot? Dr. T. Colin Campbell and my friend Chef Aj!

Everyone should have this much fun in one summer week.

Just returned from the annual Vegetarian Summerfest in Johnstown, Pennsylvania where I’ve been for the last week.

I had been asked to give four different presentations, including Five Minute Fitness,  Overcoming Hidden Obstacles, and finishing with how Fit for the Cause:  the amazing effect of physical activity on the brain for facilitating lifestyle transformation.

You know how I treasure speaking to these topics and this event was no exception!

Summerfest is attended by – I’m guessing – a good 1,000 people and a list of luminaries that would knock your plant-powered socks off.

Being ‘veg’ is not required to attend:  both the plant-positive and plant-curious were represented.  The energy is electric. This year was the 40th anniversary of this event. Greg and I just celebrated our 40th wedding anniversary, too – what a confluence of events! 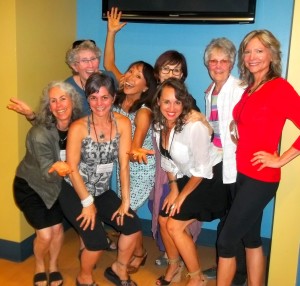 John Pierre, best known  as trainer to Ellen DeGeneres, and now Pamela Anderson – among other famous names – is an activist in healthy vegan food, animal and human rights, and tells me that these are the real focus of his work.  John Pierre received the Vegetarian Hall of Fame induction award at this year’s Summerfest – quite the honor!

Summerfest is an extraordinary opportunity to catch up with plant-based buddies:  Colleen Holland (co-creator of VegNews), Miyoko Schinner (Artisan Vegan Cheese), Jill Nussinow (Veggie Queen) and that’s just for starters – you many recognize many in the picture at left.

You’ll see the list of Summerfest speakers here and the full schedule of presentations here if you’d like to see what Summerfest is all about – and plan ahead for next year.

And then there were the meals…

Take your pick.  So sometimes I didn’t – I just had something from everywhere. I always cruised each area and found plenty (too many!)  options at each.

I think there were three desserts for each dinner, too – cakes and cobblers and veg fudge and big cookies at lunch, even in the oil-free section. 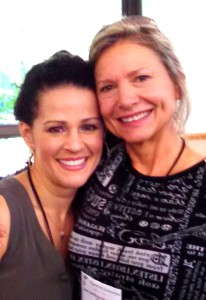 With my dear friend the effervescent Julieanna Hever

And you don’t have to ask if there are animal products in anything at Summerfest.  Having someone else cook such delicious food for a week was worth the long red-eye flight from CA to PA.

But apparently I  didn’t put on any pounds, in spite of richer fare than usual. You’ll be proud to k now I laced up every morning at about 6:30 and ran and ambled through the woods for about three miles – birds singing everywhere – a  delicious way to get grounded in the morning for presenting and enjoying all of these extraordinary events.

Summerfest takes place on the beautiful U of PA campus in Johnstown, PA and there were running trails through the woods right outside my room.

Ex-mega dairy rancher Howard Lyman  gave us the inside scoop on  fallout from his appearance on Oprah a few years back (remember the big burger lawsuit after Oprah said she’d ‘never eat a hamburger’ again?).  Summerfest was the East Coast premiere of Cowspiracy, a documentary about animal agriculture as the biggest contributor to environmental degradation. 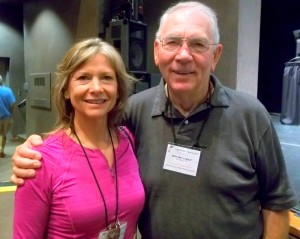 With Howard Lyman, aka The Mad Cowboy – always an inspiration and as kind and generous as they come.

I’d interviewed Howard several months ago for my new book and it was such a treat to meet up with him once again.  True story:  on the drive from WA to PA for Summerfest, their car (he and his wife drove across country) was struck by lightening while traveling at 79 mph, which disintegrated the luggage rack and cut off all electrical to the car.  They had to keep their fingers crossed that there wouldn’t be a curve in the road while they rolled to a stop.  A rental car got them the rest of the way to Summerfest.

Lots of pictures were taken and I’ve created a photo album on my facebook page here:

So sorry if you don’t have a facebook account, but my dance card is so full I can’t think of a faster way to get them up for you to see!  I’ll sprinkle some shots in here so you don’t miss out.

The manuscript of The Plant-Based Journey is due August 1!  I’m happy to report that she’s complete – but not quite editor ready.  I must go back in and 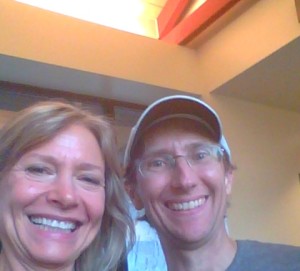 With my good friend and partner in plant-based, heart-centered healthy living, John Pierre

trim!  “PBJ” needs to lean out a little. The teacher in me always wants to meet the needs of multiple learning styles and my writing shows it.  My heart’s in the right place and it makes for good teaching, but when it comes to a book manuscript being concise is a virtue.

Starting today, I go back in with surgical gloves.  You’ll be happy to know that my editor at BenBella books has responded very enthusiastically to some sections I sent to her along the way.  Yay!

You know me – five ingredients and five minutes makes for the perfect recipe! So though I’ve had the copy of my good friend Miyoko Schinner’s Artisan Vegan Cheese cookbook, I’ve been dragging my heels at making it.

So I purposely attended Miyoko’s cheese making session to get over it and am happy to announce I finally got started on making her simplest of cheeses!  I’ll report in on the process – for now, here’s proof that I’ve started my plant-based cheese process! I’ll take some pics as I go along to share with you, so stay tuned.

So many more details to share – can you come over for a few hours? But the morning walk calls and then it’s back to my new 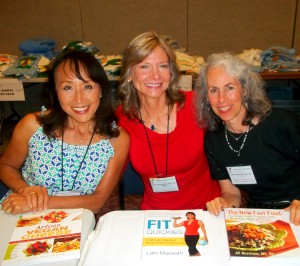 baby, The Plant-Based Journey!  Must get lots done before I head back to D.C. next week – did I tell  you Dr. Neal Barnard asked me to present at the PCRM International Diabetes Conference next week?  Holy plane travel!  I’ll have to post an announcement about this – maybe you can come?