What does it have to do with you? The 2015 US Dietary Guidelines

This week the U.S. Dietary Guidelines Advisory Committee pulled back the curtain on its official advisory for what Americans ‘should’ be eating.

Due out every five years, the last Guidelines were revealed in 2010.

That means this is the year for an update.

What’s that got to do with you?

The Guidelines are yet to be finalized.  Yet when they are, they will serve as the  basis for all dietary-related federal programs, including school lunches.

That means it affects your kids lunches, your grandkids lunches, WIC, nutrition labels on packaged foods, food advertisements, and whole lot of other eating venues.

The report is a huge step forward in several ways.

First, vegetarian diets were singled out as one of three healthful diet patterns. The other two were the Mediterranean diet and what is collectively called  the “Healthy U.S.-style Pattern.

Because vegetarian diets reduce the risk of obesity, diabetes, and many other health problems, they have risen in stature in each succeeding edition of the Guidelines.  This year’s Guideline is no exception.

The report emphasized the risks associated with saturated fat consumption, holding  true to its previous recommendation that no more than 10% of calories should come from saturated fat -in spite of recent newsroom-hyped reports that saturated fat found in dairy and meat products is not as bad as we thought.

I was impressed to see that the report has deleted “lean meat” from its “eat more of” list. Apparently the US Dietary Guidelines Committee was convinced that there is no evidence demonstrating that increased consumption of “lean meat” offers health benefits.

Finally – and this is huge – the report underscores the connection between food’s relationship to environmental health – directly related, of course,  to human health.

The report suggested that cholesterol in foods is not a major danger.

According to Dr. Neal Barnard, this is in direct “contrast with the Institute of Medicine, which found that cholesterol in foods does indeed raise blood cholesterol levels, especially in people whose diets are modest in cholesterol to start with. On this topic, the Dietary Guidelines Advisory Committee did no original research and instead deferred to a 2014 report by the American Heart Association and American College of Cardiology.”

The committee also persists in recommending the consumption of fish – in spite of the contamination of our fish supply due to the bioamplification of mercury, chemicals, and toxins in fish flesh, not to mention our dwindling planetary fish supply.

There are lots of conversations we could have in response to the proposed guidelines.

For example, you may have seen the kerfuffle in the news headlines this week, as the debate swirling around changing the advisory in cholesterol continued to escalate, with the Committee advising the removal of cholesterol as a “nutrient of concern” in the American diet.

As Dr. Barnard points out, most foods high in cholesterol are also high in saturated fat – and the USDA is still advising restricting consumption of saturated fat.

Dr. Joel Kahn astutely observes in his fine analysis of the new US Dietary Guidelines, the American Heart Association 2013 guidelines for prevention of heart disease reduced the recommended amount of calories from saturated fat from 7 percent to 5-6 percent based on an extensive review of the literature. “We should be advised to order ‘I will have a quarter of an egg over easy’, so as not not exceed the saturated fat goal!” Kahn brilliantly comments.

The Scientific Report released this week opens with some observations edifying to those of us striving to shift the dietary patterns of Americans to whole foods plant based:

About half of all Americans – 117 million individuals – have one or more preventable chronic diseases that relate to poor quality dietary patterns and physical inactivity, including cardiovascular diseases, hypertension, type 2 diabetes, and diet-related cancers.

More than two-thirds of adults and nearly one-third of children and youth are overweight or obese. These devastating problems…call for bold action and sound, innovative solutions.

Several observations on US Dietary trends made their way to the report, informing the guidelines. The following chart I screen captured for you from Committee preparatory documents:

And how about this nugget direct from the report:

Overall, the evidence base on the links between diet, physical activity, and health has never been as strong or more compelling.

They even are so bold as to include a graphic connecting the diet, exercise, and lifestyle dots. 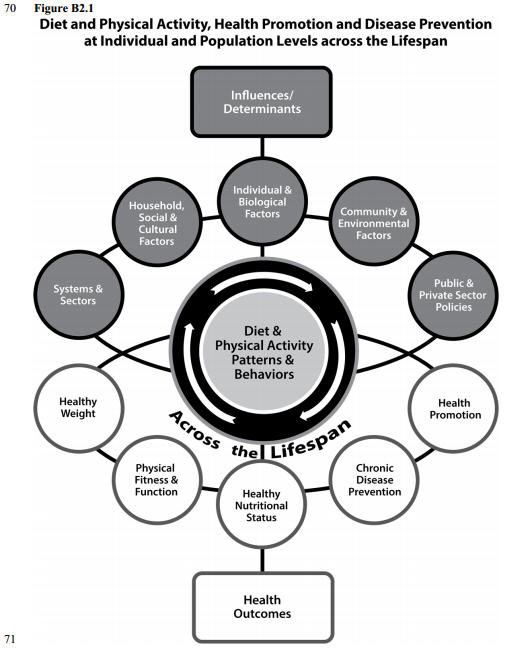 Direct from line 565 of the Guidelines, the emphasis on plant-based foods is clear:

To achieve and maintain a healthy body weight, individuals are encouraged to consume dietary patterns that are higher in vegetables, fruits, and whole grains; include seafood and legumes; are moderate in dairy products (with an emphasis on low- and non-fat dairy), and alcohol; and are lower in meats (including red and processed meats), sugar-sweetened foods and beverages, and refined grains. During childhood and adolescence, a time period critical for the prevention of  obesity later in life, a dietary pattern similar to that associated with a healthy weight in adults should be encouraged.

With 571 pages to the US Dietary Guidelines Committee document, there’s a lot to look at.

Luckily we have the fine educated analytic eye of the plant-based doctors such as Neal Barnard, MD, and Dr. Joel Kahn, MD, to help us decode it.

And at the end of the day, here’s what it boils down to.

Having government agencies recognize important nutritional research in its public directives is a definite plus.  The fact that these guidelines shape public policy makes it even more imperative that documents  such as the US Dietary Guidelines reflect advances in the science of nutrition and disease prevention.

These types of nutritional advances and awareness, when you come right down to it, make the lives of plant-based eaters easier. It’s not a coincidence that the increasing amount of vegetarian and vegan options on restaurant menus and on the grocery shelves have risen in the last few years.

There is some trickle down effect of growing food-sense at the government policy level to what we find in the marketplace.

And develop your dietary plan accordingly.  Here’s the plant-based eater’s rules of thumb:

What do you think of the new Dieary Guidelines?  Looking forward to your thoughts in comments below.

Cholesterol Confusion: Let’s Make Sense of It, a response by Dr. Neal Barnard of the Physician’s Committee