5 reasons to get yourself to the next Healthfest 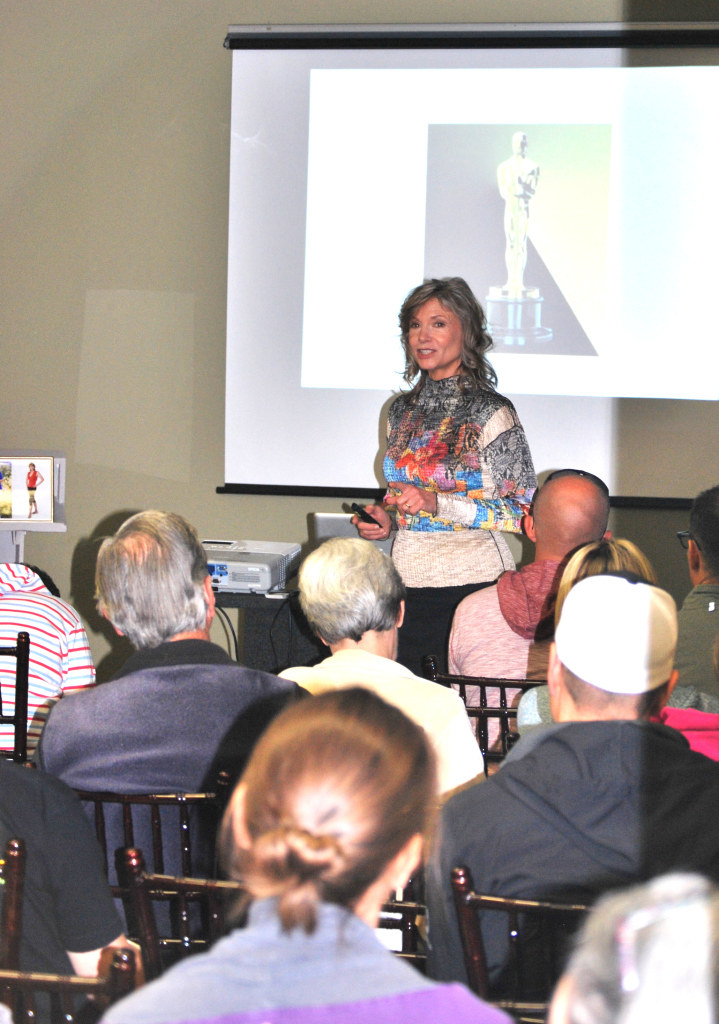 “Exercise walks away with the award in the role of best supporting player in transition to a plant-based diet” – from The Plant-Based Journey.

When five-term mayor of Marshall, Texas, Ed Smith, received a diagnosis of prostate cancer in 2008, he decided to treat it with aggressive dietary changes under a doctor’s supervision.

With one of the best reputations of veg festivals anywhere, I was excited and honored to present at this year’s event, where  – ” The restaurants all went vegan and close to 600 people flew in to hear what the Healthfest 2015 website calls ’17 of the most influential and sought after speakers and athletes in the world.’ ”

Which seems as good a place to start as any.  Here are five reasons to get yourself to Get Healthy Marshall next year – officially slated to begin April 1, 2016. 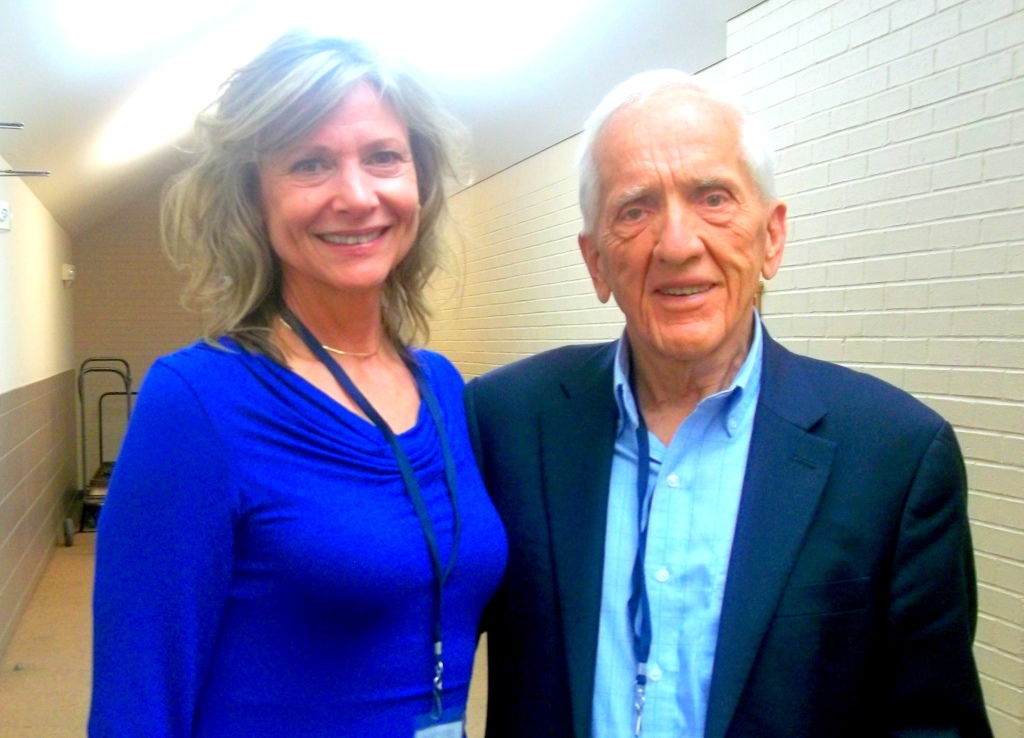 Backstage with the honorable T. Colin Campbell before his presentation which launched Healthfest

When an event launches with the likes of Dr. T. Colin Campbell, you know you’re up to something good.

Rich Roll warmed up the crowd with his story of plant-based transformation, but the seats filled even more when Dr. Campbell took the stage. Cutting right to the core of The China Study, this set the tone for the event.

This was also my first opportunity to thank Dr. Campbell personally for coauthoring the Preface to The Plant-Based Journey – the moment captured on camera at right. I can’t wait to get the Preface into your hands! It stands alone as a poignant lesson on plant-based living. 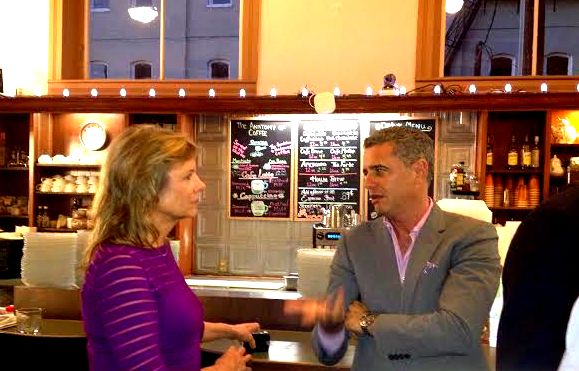 Dr. Garth Davis and I never seem to run out of things to talk about.

I hope that soon you get a chance to hear Dr. Garth Davis present.

With one of the best ‘protein’ rants around, Garth even has a book coming out around the same time as Journey titled, appropriately, Proteinaholic. Don’t you love that?

Garth is able to blast the protein myth to the ground (the misdirection that we need lots of protein)  with lightening speed and entertaining flair.  I first met Garth last summer when we shared the stage at the PCRM Intl. Diabetes Conference in D.C. Put Proteinaholic on your Amazon wish list. Gene Baur, of course, is one of my favorite people anywhere, any time. A tireless advocate for the animals and all things plant-based, and co-founder and president of Farm Sanctuary, I bumped into Gene early Sunday at Marshall’s Central Perk, which had flooded their entire menu with vegan options.

My publisher was taking me out for lunch via two of my darling partners in The Plant-Based Journey book adventure: Heather my editor, and Lindsay, the marketing genius.  As we were about to sit down to eat (I had a Reuben sandwich, which I enjoyed so much 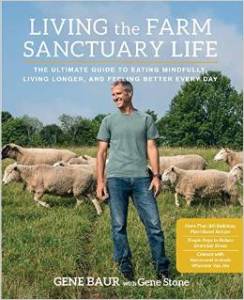 I’ve recreated it twice since getting home from Healthfest, see picture below), Gene Baur walked in. Which gave us a chance to catch up.

Gene has a new book coming out – Living the Farm Sanctuary Life – due for release this Tuesday, April 7.

I’ve had a chance to get an early sneak preview of this book and am thrilled to see that it fires on all of the cylinders I hold dear about plant-based living: the health, the animals, and the environment. It’s a gorgeous, wonderful work and when you pre-order by April 7, you can enter your name into a raffle here to win all kinds of prizes.

By the way, Gene is scheduled to be on Jon Stewart’s The Daily Show on Monday, April 6! See you there. 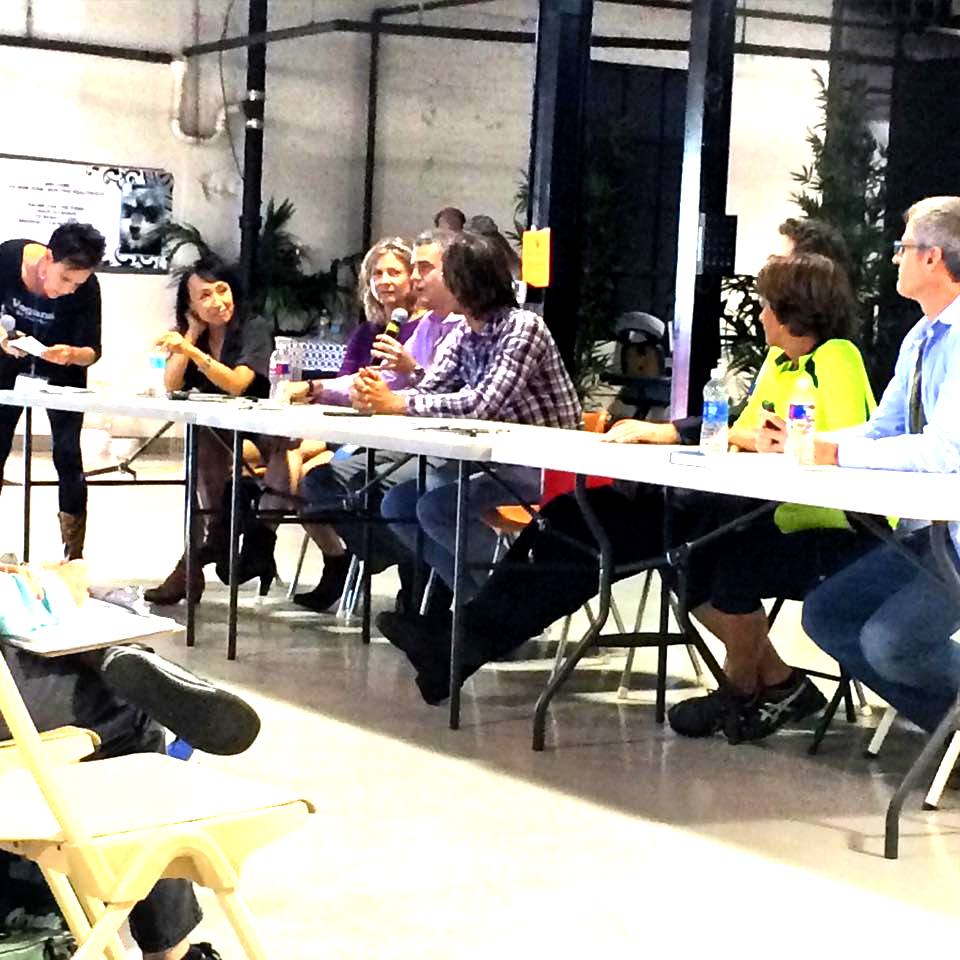 All-in-all, three physicians presented,  including the medical director of Cook County (Chicago), including urologist Dr. Terry Mason, who apparently held  everyone’s undivided attention with his “It Has Nothing To Do With The P____”  talk. Mason expounded about how all blood vessels are connected. Block one, and you block the others. The doctors concur that diseases can in large part be stopped cold, reversed and even prevented by a whole foods plant-based diet. 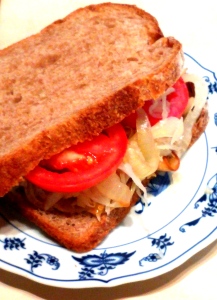 The Reuben Sandwich I ate at Central Perk in Marshall was so good that I came home and recreated it (above) in my kitchen. Sourdough wholegrain bread, carmelized onions, sauerkraut, sliced tomatoes, and toasted tofurky.

My contribution came in four parts.  First, one of my favorite presentations to deliver, “The Food and Fitness Connections: the Profoundly Powerful Effect of Exercise on Your Plant-Based Journey” – because of the changes physical activity make in your brain. Lifestyle change demands neuron power that nothing can fire up quite like a little bit of exercise.

With Miyoko, Chef Aj, and Del Stroufe in the lineup, just as you suspected we had plenty of opportunities to indulge in all kinds of abso-delicious plant fare throughout the weekend.

Several food demos delivered non-dairy mac and cheese, some of the best potato salad I’ve ever had, black bean chili, and did someone say veg lox and bagels?  I have the recipe to prove it.

And best of all, I found out how to sneak into the backstage kitchen and “taste” (I don’t use little plates) the preps and leftovers.  Stick with me!

Not only that, but the entire fleet of restaurants in downtown Marshall had ballooned the plant-based menu section of their menus to include an astonishing variety of plant-based plates.  Veggie burger with raspberry chipotle sauce?  Reuben sandwich?  Mac and non-dairy cheese?  Portobello burgers?  Salads of all kinds?  Let’s just say it was easy to get eats.

Three, 20 minute Fit Quickies exercise sessions were peppered in throughout the course of the weekend.

I never had time to shift out of my “presenting” threads – skirt and the cute heeled boots that I brought along for the occasion.  But that didn’t matter at all. As a matter of fact, I kind of liked that it turned out that way because it sent the message that you can sneak physical activity in anywhere, any time – even if you are still in skirt and heels.  Big thanks to everyone who came out for my sessions at the beautiful Shake and Move Fitness.

And blow me down if I didn’t place first in my division on the Sunday morning 5K Fun Run. Honestly, though I jog (ramble? joggle? walk-burst?) every morning in the woods at home, I haven’t run a race in years.  Must have been the PCRM VegRun t-shirt I was wearing. 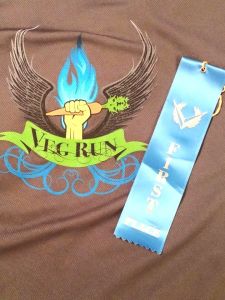 Do I really now get to say that I “placed” in a race in which UltraMan Rich Roll was entered too?  I’ll take it!

Marshall, Texas is a small town.  So small that if the cafe owners are in the mood for closing for a day, they just do. And many of them do just that on the weekends. 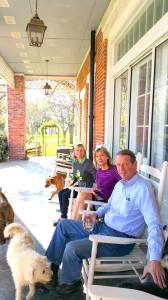 On the plantation porch with Judge and Christina Anderson, two cats, and four dogs – who we had the pleasure of running with on the 400 acres of property every morning

But for Healthfest weekend, Marshall rolled out the red carpet.

As mentioned, all of the restaurants beefed up the plant-based options on their menus and stayed open extra hours so we could eat whenever the mood hit.

And lucky, lucky me was the house guest of Christina and Judge Richard Anderson. They have restored an old plantation home built in 1845, that sits on 400 acres of woods and grasslands.

Christina and Richard vacated their main house and moved themselves to an adjoining guest house, leaving my dear friend and travel buddy Miyoko Schinner and myself the run of the mansion. Miyoko and I were there for four nights, so this was no small feat. Talk about southern hospitality!

The speaking venues were all perfect and in high polish for the occasion.  I lucked out and presented in the beautiful art gallery at the Michelson Museum.  Perfect ambiance. The gallery in Michelson Museum was my presenting venue – all the chairs and artwork ready for attendees!

The speakers, the fitness, the food, and the town-every bit of it part of the fun. One of the nice things about Marshall being so quiet is that parking was easy and the entire historic downtown area was like our own private conference center.

We’d easily amble the streets between the food demo hall and the Museum, where I had the great good fortune of presenting in a beautiful art gallery.

Saturday evening was a wine and cheese party with the serving of Miyoko’s Artisan Cheese.  Expecting 50 – 75, over 300 turned out for this event.

Heather and Lindsay from BenBella accompanied me on every engagement, taking photos, video, and treating me to lunch. You better believe this caught the attention of the other authors presenting.  As one of them commented, “I wish my publisher would follow me around and take me to lunch!”

Hope to see you next year in Marshall! 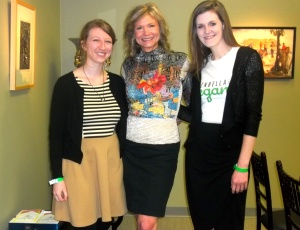 After over a year of working together on The Plant-Based Journey, I finally got to meet Heather (l) , my editor, and Lindsay – from my publisher, BenBella books. Talk about publisher support! 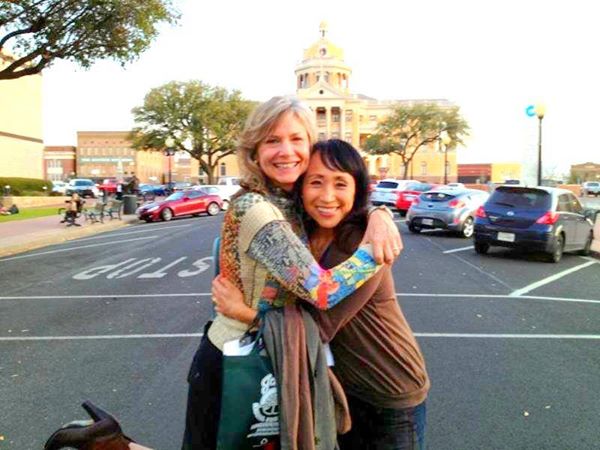 Me and my friend and travel buddy Miyoko Schinner mixing things up in downtown Marshall. If you look closely you can see those boots I was telling you about! Following the Speaker’s Panel, we all hightailed it to Central Perk for a big plant based dinner – speakers, staff, and event organizers. That’s Mayor Ed Smith and Amanda Smith, front center.