Dr. Sanjay Gupta is on a personal mission to never have a heart attack.  And in the process, he embarked on a year-long  investigation to find out what actions he could take to offset his family history of heart disease by lifestyle choices. Gupta’s investigation is document in the video below, “The Last Heart Attack in America”.

With what we know right now, we could see the last heart attack in America
~ Dr. Sanjay Gupta 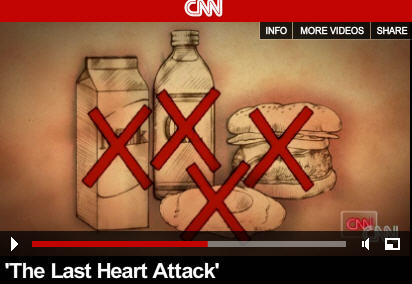 Clinton has personally reversed heart disease via a low fat vegan diet.  He made the decision to eat no more meat, no more eggs, and no more dairy.  That means, “eating nothing that has mother or a face” – other than a self-confessed bite of turkey last Thanksgiving.  Clinton is 26 lbs thinner and has positively impacted his check-up results,  enjoying a slimming diet of vegetables, whole grains, beans, and fruits, the foods which -in his own words – “I like the vegetables, the fruits, the beans – the stuff I eat now.  I like it!”

“The Last Heart Attack”: The video

Outtakes from “The Last Heart Attack in America”:

“Cholesterol causes bubbles or blisters to form in your arteries;  most of these are covered by a cap.  Inflammation and stress can cause them to thin and rupture, resulting in a clot that blocks the flow of blood to the heart…”

“Most heart attacks occur in people with no symptoms, whose arteries are less than 50% blocked”

“Your genes are not your fate”

Watch now and find out:

Preventative medicine with diet runs smack up against our meat-loving culture.  Yet taking a page from the heart-healthiest places on the planet – and applying the dietary practices of whole-foods, starch-centered, low-fat plant-based diet along with stress management  is what the doctors practicing “aggressive preventative lifestyle changes”  are prescribing that is making  “heart attacks disappear from their practices.”

Sit back and enjoy this important investigation and find out what you can do to impact your own heart health.

While working on “The Last Heart Attack,” I had a chance to interview some extraordinary people around the country. Patients struggling with heart disease provided lessons that can sometimes be taught only after being smacked in the face with their own mortality. For example, I have never seen former President Clinton so candid. He was convinced he was going to die back in 2004, after feeling chest tightness during a flight back to New York on a small plane.

I interviewed cardiologists who believe we are so darn close to virtually eliminating heart disease. And, the truth is, it doesn’t involve spending any more money, investing in any more research or creating anymore tests. Rather, it will take a strict implementation of what we already know about diet and nutrition. It will also take brave champions to navigate through the clutter of confusing counsel, special interests and shoddy science.

One day, I had a chance to speak to a couple of those champions candidly while waiting for a shoot to begin – Dr. Caldwell Esselstyn and  T. Colin Campbell, Ph.D.  I had read Campbell’s book, “The China Study,” years ago and remember how audacious he was in telling readers that most of what they believed about food and its relationship to health and disease was plain wrong. His findings changed the way people all over the world eat, including me.

And, I will admit, while I had trained my whole life to treat disease after it developed, I wasn’t medically trained in nutrition to be able to help prevent some of these diseases in the first place. Most of what I have learned has been on my own, since leaving medical school, and I think that is true for many doctors of my generation.

Simply put, Campbell’s research team found people who ate the most animal-based foods also had the most chronic disease. As important, people who ate the most plant-based foods were the healthiest. Campbell went on to describe the specific connections between nutrition and heart disease, diabetes and cancer. He also wrote of the ability to use nutrition to reverse these conditions – something that can start at almost any age.

Esselstyn took it a step further. “Sanjay, we want to make you heart attack proof.” Pretty audacious, I thought, but I couldn’t help but be engaged by this Cleveland Clinic surgeon, who was now devoting his life to preventing the diseases he made a living treating.“We are never going to end the epidemic of heart disease with stents, bypasses and medications,” he told me. That was music to my ears, because I didn’t want any of those things. Of course, it would involve essentially eliminating meat, dairy, eggs and oil – even olive oil. “Nothing with a mother, and nothing with a face,” the good doctor added.

Honestly, over the years, I have practiced the adage “eat to live,” not “live to eat.” Still, I knew it was going to be tough to carry out what he was asking. I started with a practical question for him. He was on the road traveling, and I was curious what he ate. “Thai food is always a good bet,” he told me. Sharon Kintz, who is a 66-year-old heart patient, joined me in Times Square to prove she could find a meal that satisfied her vegan requirements. Even former President Clinton says he is a vegan nowadays, and doesn’t at all miss the fast food for which he was once famous.

Virtually eliminating heart disease – it can be done, and truth is, we have known for a very long time how to do it. People have said to me as I was preparing this documentary – “Sanjay, you are advocating a radical change to the way we eat.” Perhaps, but if you really think about it, the way we eat now is in fact more radical. And when we look back on this time, a couple of hundred years from now, I guarantee you that our diet of today will be considered one of the most radical in history.

If we collectively ever want to get to the point where we have “The Last Heart Attack,” a good start would be to stop ignoring what we already know to be true.   ~ Dr. Sanjay Gupta

Are you getting all the news that’s  healthy, fit, happy and hot each week? Click here to join 1,000′s of  others + get your weekly health, body shaping and food advice for free from the Plant-Strong Fitness Expert.